Eplores one of Tanzania’s hidden gems, the big cat. The safari includes a drives in a prime game-viewing area far from the jostling crowds and accommodation in a luxury, eco-friendly tented safari camp with uninterrupted views of the endless savannah.

7 Days all inclusive Tanzania Luxury Lodge Safari  Vacation will take you to see the Big 5 animal in their natural habitat as well as other wild animals in Tanzania, on this Safari you visit the Tarangire National Park, Ngorongoro Crater Conservation Area, and the Serengeti National Park, all these Parks are located in the Northern Safari Circuit.

During this safari, you will discover and explore national parks in Northern Tanzania, the best destination for safari. You will visit  Tarangire,  Serengeti National Park and Ngorongoro. Our professional guide will drive you with a 4x4DW jeep. Complimentary drinks and mineral water will be available on the jeep. Explore wild side in Real Tanzania 7-Day Wildlife Adventures Northern Circuit Safari(Big-5).

What to bring in Tanzania luxury safari lodges

Clothes
A warm sweater as the nights can be chilly at high altitudes
Comfortable shoes, Bath towels, pillows, toilet paper

Accommodation: Luxury Lodge and Tented lodge.  Accommodation in Arusha will be at Arusha Gran Melia Hotel.

This 5 Days Tanzania luxury safari package will include a breathtaking adventure at Serengeti national park known for its annually Great safari & the big cats, the tour will also take you to the world renewed Ngorongoro Crater home to some rare species of black rhino.

You will be picking up at Kilimanjaro airport/Arusha airport with our company representative with a private transfer to take you to hotel check-in. You will meet with our tour consultant for a tour brief late continuous leisure in your hotel/ lodge we booked for you. Gran Melia Hotel Arusha.

After breakfast at the hotel, you leave early to the Tarangire National park for your Tanzania Luxury safari. This is the third largest park in Tanzania and it is characterized by the amazingly large herds of elephants that can be encountered in this park. The Baobab trees are one of the other highlights of Tarangire and the Tarangire River that flows all year round is the lifeblood of the park. Many animals; predators and prey alike gather around the river where you can do excellent game viewing.  Dinner and overnight are at  Kitela Luxury Lodge

Tanzania Luxury Safaris: After breakfast, we head towards the Serengeti National Park, via the beautiful high lying farmland of Karatu and the Ngorongoro Conservation Area. tanzania luxury safari lodges. Leaving the highlands behind, we descend into the heart of wild Africa – the Serengeti National Park – with its endless plains for Tanzania Safaris, rolling into the distance as far as the eye can see. We head to the Central Park area, known as the Seronera area, one of the richest wildlife habitats in the Park, featuring the Seronera River, which provides a valuable water source to this area and therefore attracts wildlife well representative of most of the Serengeti’s species. We arrive in time for lunch and enjoy an afternoon game drive in the Serengeti National Park. Dinner and overnight at Kubukubu luxury tented lodge.

Luxury Safari in Serengeti: After breakfast, you will have a Safaris in Tanzania game viewing at Serengeti National Park. The Serengeti, Tanzania’s largest National Park, covers nearly 6,000 square miles of grassland plains, Savannah, kopjes, hills, woodlands, and River line forest systems serve as critical water sources and are often excellent sites for wildlife viewing. Luxury Safari Tours & Trips in Northern Circuit Tanzania. Beyond the heralded migration of wildebeest and zebra, the Serengeti is best known for its big predators, including cheetah and Leopard, as well as large pride of Lions and clans of Hyenas and able to see the big 5. Dinner and overnight, Dinner and overnight in Kubukubu luxury tented lodge.

Day 6: Ngorongoro Crater back to Arusha

Today, you will have early breakfast and proceed directly to the crater floor for a five-to-six-hour crater tour with a picnic lunch down the crater whereby you will be able to see all the “Big Five”. Later, you will proceed back to Arusha in the evening.ovenight at  Gran Melia Hotel Arusha.

After breakfast in the hotel/lodge, we will transfer you to the airport either at Kilimanjaro/ Arusha airport. This will be the end of your tour and safari with us.

A Group of 6 Persons Above– USD  per person per tours 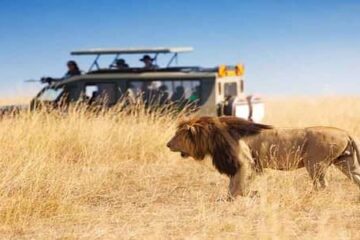 We aim on offering with unforgettable flexible safari
One tour per person
Last minute!